How I Finally Learned to Do the Splits

Sandeep Solanki
Sandeep Solanki was born in Mumbai, India, and has been studying yoga since 1999. He wanted to explore the effects of yoga from a scientific perspective and pursue optimal health, so he enrolled at the Ishwardas Chunilal Yogic Health Centre (ICYHC). At the ICYHC, Sandeep earned an Advanced Diploma in Yoga Education and completed additional training in acupressure.

I’ve always had really tight hamstrings. It’s actually one of the things that stopped me from going to my very first yoga class when I was studying yoga in India.

I was under the impression that in order to be a ‘real’ yogi, I had to be ultra-flexible. I thought I had to walk into my initial class and be able to do everything the teacher asked me to.

So it took a lot longer for me to get on my mat than I would have liked.

When I finally made it there, guess what pose the class was themed around? Hanumanasana. Or, as it’s more commonly known, the splits.

I’ll spare you the drama and let you know right away: I didn’t do the splits during that class.

I didn’t even try.

In fact, I was so angry and frustrated that there were yogis all around me doing the splits in my first class ever. Not much of a confidence booster.

I contemplated not going back. But I’d already purchased a full month pass of unlimited yoga. So I sort of had to keep going.

But a little fire had also been lit inside me. Within the anger and frustration, I found determination. I knew I was going to have to practice a lot more to get there, but I was intent on getting myself to a place where I’d be able to do the splits.

I knew I would need to build a home practice, but I didn’t know nearly enough about yoga to start one on my own yet. So I kept going to the beginners’ classes and a few yoga basics workshops.

There, I learned the correct alignment for each pose. And I was able to move at a slower pace. This was perfect for me. Being quite inflexible, I needed to move slowly.

After a few months of getting into the groove of yoga, I began practicing at home.

I quickly found out how difficult it is to maintain a home practice. What began as 30 minutes of yoga three or four times a week quickly turned into three or four hamstring stretches about every other day.

But, as I kept up my studio practice, each time I found myself in a class that incorporated the splits I’d avoid the pose.

Sure, I’d been getting a lot more flexible and could feel the difference in my body, but I just never got myself to go there. Because what if, after all that time, I still couldn’t do it?

That fear was debilitating and kept me stuck in one place for much too long.

I continued stretching my hamstrings and doing various hip opening poses like and Utthan Pristhasana (lizard pose), on my own time, but never actually tried getting into the splits.

Then, I went to a class taught by a teacher I hadn’t been to before. About halfway through the class, he guided us through Ardha Hanumanasana and then into full Hanumanasana.

But before we went into the splits, he said, “Give it a try even if you think it’s not in your practice. All poses are in your practice in some form or another. All you have to do is take the first step.”

So I did. I loved that way of looking at it. The poses are all part of our practice if we’re willing to at least try.

And I was able to extend both legs in either direction!

It wasn’t perfect by any means. My hips were off the ground and I was holding myself up with my hands. My knees were a bit bent. But the alignment was right. And I was absolutely more flexible than before.

After that, I kept trying. Each time I was given the option to do the splits, I did them. And I got better and better.

I still can’t do them every time. But that’s the beauty of yoga. Even though the poses are the same, they look different every single day.

Sometimes we get so stuck in our minds. I was stuck in thinking that I couldn’t do the splits. It was, simultaneously, my intention for practicing and also the only pose I would never even try.

I don’t think we give ourselves enough credit sometimes. Just because we aren’t able to do something one time doesn’t mean we won’t be able to later on. It’s simple, yet we overcomplicate it all the time. Probably because we know that it takes hard work, commitment and lots of patience.

It took a long time for me to work up to the splits. And due to my body type, I still have to work on it almost daily.

We get stuck in a process of, “I’m not enough of, this, that and whatever.” But we are. You are. Progress takes practice.

If you feel like you’ll never be able to do the splits because you have the tightest hamstrings ever, that’s okay. So change it.

Start by changing your mind first. Know that you can get there. Only then will your body change.

Stretch. Go to yoga. Get back to the basics. And then, keep trying. Keep growing.

You’ll never know what you’re capable of if you continue to stay the same. Decide what you want, and go get it. 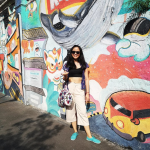 Ee Lee Ong
Ee Lee is a yoga teacher & writer based in Kuala Lumpur, Malaysia. She is passionate about philosophy and is a travel enthusiast. Ee Lee is also an animal lover, and enjoys exploring the creative arts in her free time.